The Australian Minister for Defence, Marise Payne has announced the names of the two new Support Ships that will be built by Navantia based on the SPS Cantabria (A15) Auxiliary Oiler Replenishment (AOR) currently in service with the Spanish Navy. 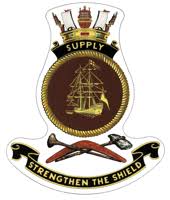 Both ships should enter service from 2020 and reach Full Operating Capability (FOC) by 2022. They replace the existing HMAS Success (OR304), which has been in service since 1986, and HMAS Sirius (O266) which is a converted commercial tanker in service since 2006.